A four-year-long experiment with a four-day workweek has been dubbed an “overwhelming success” and has resulted in many workers permanently working fewer hours each week while receiving full pay. The trial ran in Iceland from 2015 to 2019 and included 2,500 participants working in a range of settings including preschools, offices, social service providers, and hospitals. Surprisingly, the study found that productivity remained the same or even improved despite a 20% reduction in weekly hours worked.

The experiment has been so successful that 86% of Iceland’s workforce will now be working fewer hours each week and getting paid just the same as they would for a “full” week of work. The idea is starting to catch fire among corporations like Unilever and countries alike. What’s driving the adoption of the 4-day workweek?

The Benefits of a Shortened Workweek

Unilever has embraced the idea of a four-day workweek and has initiated its own experiment. The British multinational is letting their staff in New Zealand trim down their working hours by 20% while still receiving 100% of their pay. Spain too is planning their own pilot program for a four-day workweek.

The benefits of such a move are abundant including improved mental health for employees, increased productivity for employers, and a decreased carbon footprint overall.

Over the four-year experiment, researchers collected data on indicators for wellbeing, work performance, and work-life balance. Overall, the results of the reduction in working hours are clear -- employees maintained or increased productivity and workers wellbeing and work-life balance improved.

The mission of this study was to find out if employees could work fewer hours and maintain the same level of output. To accomplish this, participants had to start by rethinking how tasks were completed, shortening meetings, and cutting out unnecessary tasks. As the experiment progressed, the government-run trial found that organization was key to working less -- and the lure of reduced hours was motivating enough for staff to organize their work more efficiently.

In the last phase of the Iceland experiment, wellbeing at work was analyzed. In workplaces like offices and schools, wellbeing increased while other workplaces showed no increase but no decline in wellbeing either. Workers at government jobs saw symptoms of stress fall.

“This reduction in hours shows increased respect for the individual. That we are not just machines that just work … all day. Then sleep and get back to work. But that we are persons with desires and private lives, families and hobbies.” (quoted Jóhannesson & Víkingsdóttir, June 2018, pp. 20–21).

Work-life balance drastically improved for employees and managers who participated in the trial. In general, participants reported it was easier to do errands, participate in home duties rose-- with men taking on a greater share of cleaning and cooking, exercise rates climbed, and stress levels fell at home.

The Economy Does Better With a Four-Day Workweek

The Iceland Experiment was borne out of necessity. The hardworking Nordic country was ranked as one of the countries with the highest rates of employees who work very long hours. Their work-life balance was terrible as the country also ranked as one of the countries that provides the least number of hours per week for leisure or personal care. When it comes to work-life balance, Iceland found itself withering among the ranks of Chile, Mexico, and Japan. Despite all this hard work and low unemployment, Iceland still found itself reporting lower levels of productivity relative to its neighbors. Struggling with higher working hours and low productivity, the country decided to take radical action and experiment with a four-day workweek. 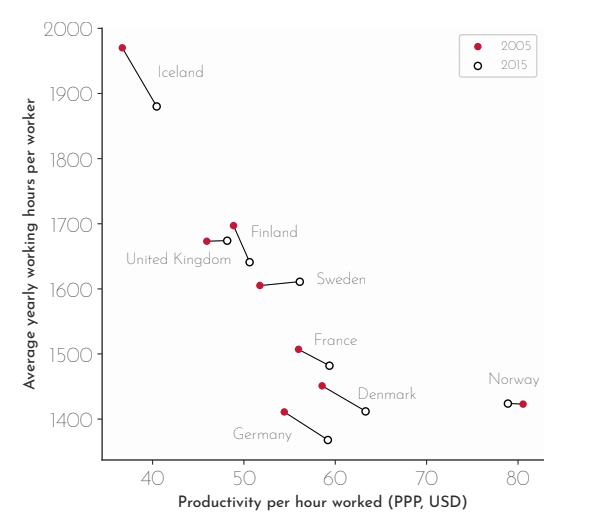 "Per hour productivity and average yearly hours across different countries. There is a strong correlation between shorter working hours and increased productivity amongst wealthy nations." (Source)

During the Iceland trial, it was found that participating workplaces showed increased support from colleagues, more encouraging and fair management, reduced confusion over roles at work, and more independence.

International studies show a quantitative relationship between working long hours and consumption patterns that are environmentally harmful as well as a correlation between working shorter hours and more consumption patterns that are more sustainable. Some examples of these damaging consumption patterns displayed by those working long hours include purchasing ready-made meals for a quick dinner, a propensity to order household staples online when there is not enough time for shopping locally, those items then must be shipped by plane and delivered by a truck to make it your doorstep.

A 2012 study from the Political Economy Research Institute at UMass Amherst found that hours worked is the key variable that defines the consumption patterns for any given economy. Their study examined 29 OECD countries over 37 years, from 1970-2007. The 37-year study from UMass found that a 10% reduction in working hours will reduce a nation's carbon footprint by more than 14% while GDP remains constant.

Priorities have changed in the post-covid world with wellbeing, burnout, and work-life balance taking on a new significance for workers. The four-day workweek is a proven plan to address these issues, keeping workers, the economy, and the environment healthy. To work better together, we just may need to work less.

There has been a major paradigm shift when it comes to where, when, and how we work. From hybrid work models to the four-day work week, Twinstate Technologies can help your company navigate the changes and implement the workplace technology you need to generate revenue and stay relevant in a rapidly changing world. Contact us with specific questions or learn more technology insights with our guide to technology trends and investments for 2021. 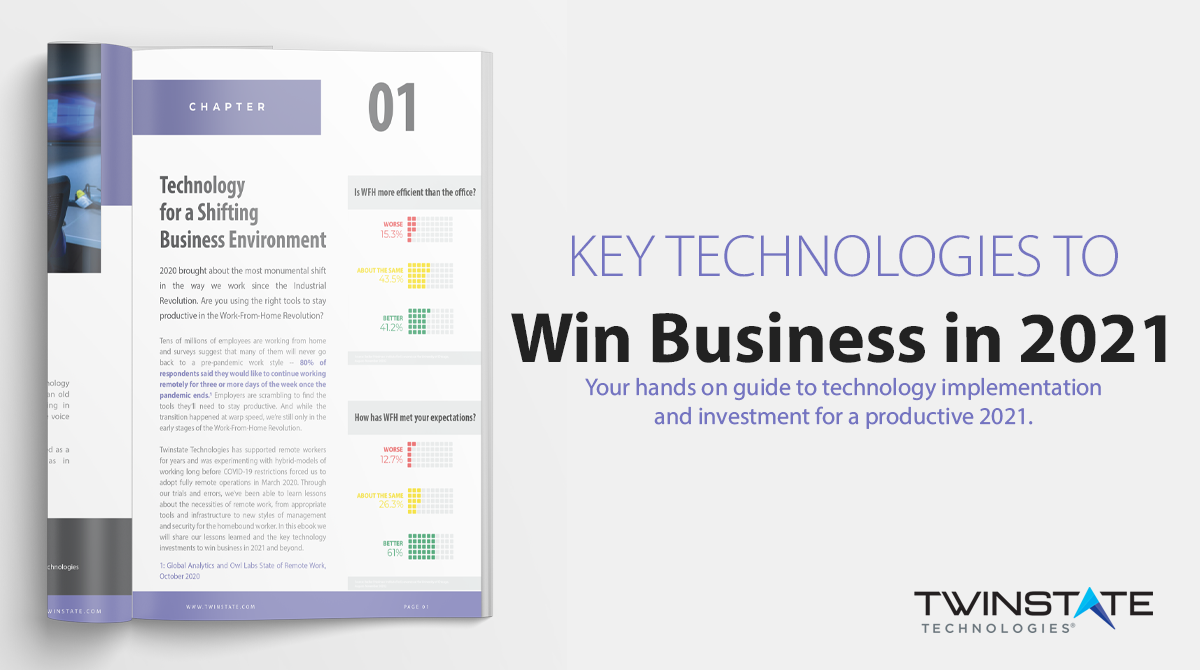 Emotet is Toast. "World's most dangerous" Botnet is Taken Down.

One of the most dangerous global hacking networks has been taken down in an international sting, leading to multiple arrests. ...
Start Reading
Evan Clark Mar 10, 2021 11:14:16 AM 5 min read

At least 60,000 organizations are affected by a security flaw in Microsoft Exchange on-premise servers. Microsoft is warning ...
Start Reading
Evan Clark May 28, 2021 9:57:38 AM 6 min read