UCaaS vs VoIP: Understand the Differences in Business Phone Systems

So you’re looking for a new office phone solution and you go on Google where you search “business phone systems” only to be overwhelmed when you find millions of different results for things like “UCaaS,” “VoIP,” and  “Cloud Communications.”

What do you do next? How do you know what the difference is between these options and which one is right for your organization? In this post, we are going to help break down three categories of phone system providers as it exists in the marketplace today and explain the difference between UCaaS vs VoIP. Let’s jump right into it.

When evaluating communication systems for your business, have you ever found yourself wondering what the difference between UCaaS and VoIP is? Well here are the five things that set them apart. But before we get into it, let's just explain the acronyms quickly.

VoIP stands for “voice over internet protocol,” since that's exactly what it does. It transmits your voice over the internet rather than through legacy phone lines.

UCaaS stands for “unified communications as a service.” It's a unified platform that combines multiple formats of communicating like video conferencing, voice calls, emails, text chat, file sharing, and much more. UCaaS includes VoIP as part of the delivery of the applications.

Essentially, UCaaS is a user-facing platform that providers sell to customers while VoIP is a technology that powers that platform. Now that we understand the terminology, here are five differences between VoIP and UCaaS:

VoIP can be set up in minutes, while it can take a lot longer for UCaaS depending on the type of hardware that you're using and the applications that you will be deploying.  Oftentimes, a phased rollout of applications can be helpful for implementation planning.

UCaaS subscriptions can costmore than the price of pure VoIP plans because there's a wider variety of communication options at your disposal with UCaaS.

Companies that are modernizing their systems in the name of seamless internal collaboration tend to select the full UCaaS functionality. With UCaaS it's easy to integrate with workflow software, share files, and simulate in-person meetings with virtual meeting spaces and HD video conferencing.

Pinpointing issues in a UCaaS system is different compared to a VoIP system. Vendors can often monitor service quality from their end in UCaaS scenarios, which can help make the identification of issues possible.

Now that we know a bit more about the difference between UCaaS vs VoIP, let’s explore three different types of UCaaS.

The first type of UCaaS vendor we’re looking at are premise-based phone systems that have migrated to the cloud. So this category is going to consist of vendors like Avaya, Cisco, and Mitel (which acquired Shortel) -- Those brands are the three major players. They are very respected household names for premise-based phone systems and now they have their hosted play.  Mitel, for one, can provide an all premise, all cloud, or a hybrid design with their platform creating tremendous flexibility.

The second type of UCaaS vendors is platform-based providers. A good example of this is Android by Google. Google created Android and they make it accessible to other companies like Samsung and LG. These other companies -- the Samsungs and LGs -- then make their own versions of Android, putting their skin on top of it.

Another example of this is Broadsoft.

The third type of UCaaS company are those that are 100% born in the cloud. From day one to today, these providers are cloud-first and cloud-only. You’re probably familiar with some of these companies already. Brands like RingCentral, 8x8, Fuse, and DialPad, just to name a few. The number one thing to evaluate here is, does their platform integrate with tools like your CRM and your ERP? Does it integrate with the tools that you and your team actually use on a day-to-day basis?

While UCaaS can be a bit more expensive than other business communication options, the productivity enhancements and workflow integrations can quickly lead to a positive ROI. It all depends on your organization's needs and how you can do business better.

If you would like to get a greater understanding of your ROI on a UCaaS System, I recommend using the UCaaS ROI calculator, a free tool from Twinstate Technologies. If you need any help in the process of picking a phone system, contact us, our team is here to help you. 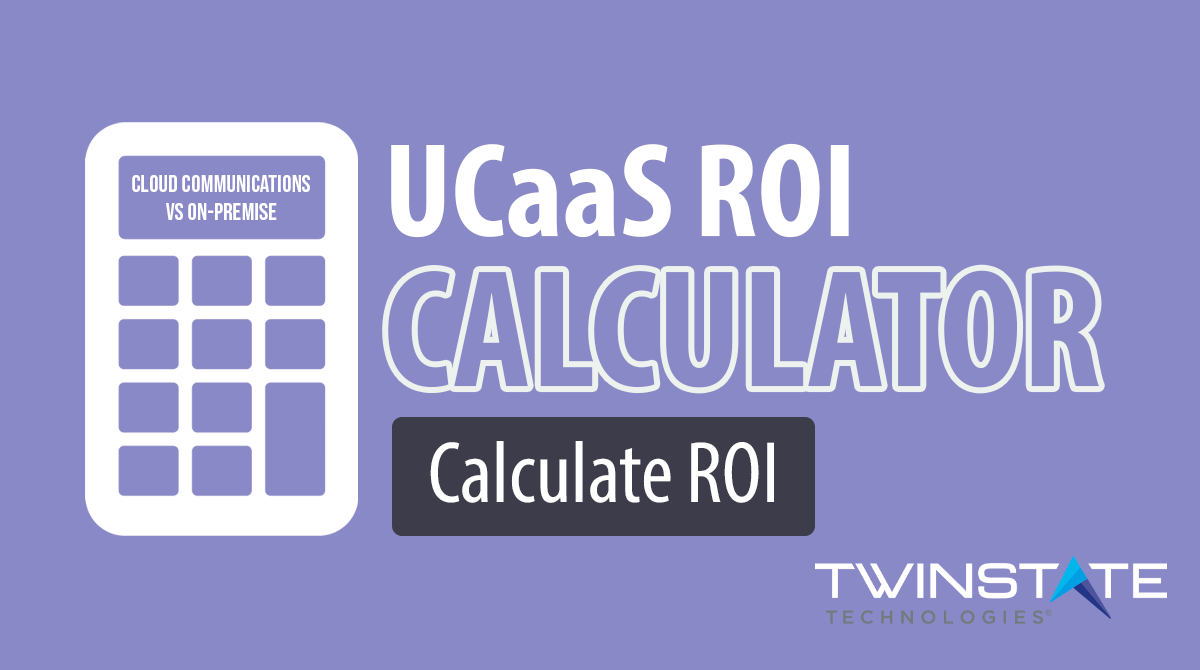 Technology is changing how we communicate in the office and how our customers communicate with us. Workers are using more ...
Start Reading
Evan Clark Jun 25, 2020 3:12:09 PM 4 min read

What is SIP Trunking?

What You Need to Know About Unified Communications

Regardless of what business you're in, your success is built on quality communication. One aspect of communication that demands ...
Start Reading